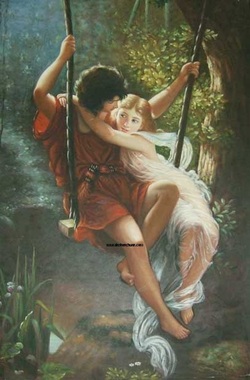 ISSUE-XI NOVEMBER 2010
Over the past issues The Enchanting Verses has featured poetry from all age groups from several cultures and countries and the present issue also provides with the same. The fact behind this is we believe poetry to be ageless and a uniform medium of aesthetical as well as sublime conversation that has the power to pinch the walls of the heart and pierce the untouched dimensions of life. Needless to say poetry remains as the less read medium of literature but statistics on the internet says that the graph of writing poetry has shown considerable increase since the last decade. Perhaps the truth behind this is poetry is the language in which one speaks to himself. For one, his poetry is the best in the world and we as editors have tried to be on the poet’s side as we have been in our past issues. The present issue also specializes in variety and one has to set mind and heart in one sail to perceive the invocation.

Born in Southampton, Watts was brought up in the home of a committed Nonconformist — his father, also Isaac Watts, had been incarcerated twice for his controversial views. At King Edward VI School (where one of the houses is now named "Watts" in his honour), he learned Latin, Greek and Hebrew.

He displayed a propensity for rhyme at home, driving his parents to the point of distraction on many occasions with his verse. Once, he had to explain how he came to have his eyes open during prayers.

"A little mouse for want of stairs

ran up a rope to say its prayers."

Receiving corporal punishment for this, he cried

"O father, do some pity take

And I will no more verses make."

Watts, unable to go to either Oxford or Cambridge due to his Non-conformity, went to the Dissenting Academy at Stoke Newington in 1690, and much of his life centred around that village, then a rural idyll but now part of Inner London.

His education led him to the pastorate of a large Independent Chapel in London, and he also found himself in the position of helping trainee preachers, despite poor health. Taking work as a private tutor, he lived with the non-conformist Hartopp family at Fleetwood House, Abney Park in Stoke Newington, and later in the household of Sir Thomas Abney and Lady Mary Abney at Theobalds, Cheshunt, in Hertfordshire, and at their second residence, Abney House, Stoke Newington. Though a non-conformist, Sir Thomas practised occasional conformity to the Church of England as necessitated by his being Lord Mayor of London 1700–01. Likewise, Isaac Watts held religious opinions that were more non-denominational or ecumenical than was at that time common for a non-conformist, having a greater interest in promoting education and scholarship, than preaching for any particular ministry.

On the death of Sir Thomas Abney, Watts moved permanently with his widow and her remaining daughter to Abney House, a property that Mary had inherited from her brother, along with title to the Manor itself. The beautiful grounds at Abney Park, which became Watts' permanent home from 1736 to 1748, led down to an island heronry in the Hackney Brook where he sought inspiration for the many books and hymns he wrote. He is likely to have attended the nearby Newington Green Unitarian Church, as "in later life was known to have adopted decidedly Unitarian opinions".

He died in Stoke Newington and was buried in Bunhill Fields, having left behind him a massive legacy, not only of hymns, but also of treatises, educational works, essays and the like. His work was influential amongst independents and early religious revivalists in his circle, amongst whom was Philip Doddridge, who dedicated his best known work to Watts. On his death, Isaac Watts' papers were given to Yale University, an institution with which he was connected due to its being founded predominantly by fellow Independents (Congregationalists).

Book Review of The Song of my Dance and the Dance of my Dreams by Dr. John A Theodre(Pg-29-30)

David G Paul
©2010The Enchanting Verses International NO PART OF THE CONTENTS OF THE ISSUE-XI OR THE WEBSITE CAN BE COPIED FOR COMMERCIAL OR OTHER PURPOSES WITHOUT THE WRITTEN PERMISSION OF THE ENCHANTING VERSES INTERNATIONAL.